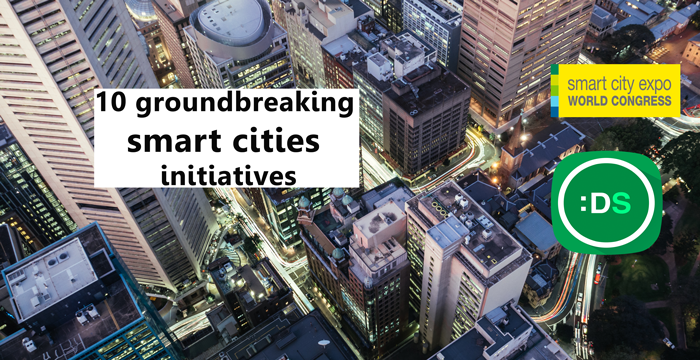 They are 2.0 cities. They are places in which technology plays a key role in conversations. They are spaces where technology links people together and also to infrastructures. They are Smart cities.

Follow the flow of visitors, monitor surveillance cameras, know where each bus is at, connect to traffic cameras to update travel times… these are some of the possibilities that WiFi offers in cities. And, at the same time, it allows vehicles to be connected to the local council. With all of this information, the trouble spots can be analyzed and the necessary changes and actions can be made in real time.

The city on your smartphone. And also :DriveSmart

However, it is useless to have all of these possibilities if we are not able to measure and transmit the information. Yes, measuring is one of the main objectives. The use of telemetry, such as in :DriveSmart, provides thousands of data that, when connected to a system that knows how to interpret them, enables immediate decision making. Turning on and off streetlights, seeking information from the air moisture detection sensors, or assessing when automatic irrigation has to activate itself in parks and public gardens, are just a few examples. And, of course, all in real time.

Sustainable mobility is one of today´s key topics. How can we have friendly, clean and safe cities, if the streets are crowded with cars? :DriveSmart is an active player in this change of attitude. Cars will always be a part of cities, they don´t have to disappear; what they need is to be transformed towards being more efficient and convenient to all of our fellow neighbors.

The future is technologic. We must seek and take advantage of synergies

Smart cities are also elements to promote social justice. Is it fair that a car, used by a single person, is assigned the same space that a bus carrying 50? No, therefore we have to undertake changes in cities to make life easier for everyone.

That is why, today, we point out 10 of the most disruptive initiatives that have already been implemented in cities or that we´ll see in the short term since they are already technically feasible:

Smart Dumpsters: they inform when they are full by using sensors that measure the height of the bags deposited. The sensors send a notice that permits creating a more efficient waste collection route.

Intelligent Buildings: also known as “smart buildings”, they can save energy up to 30% through the use of domotics (building automation) and by being energy self-sufficient. Europe is developing guidelines to create a standard for implementing them in new buildings.

100% electric Car sharing as a complement (not an alternative) to public transport. Certainly, car sharing is a more economical and efficient option in comparison to the traditional use of private vehicles, and it is gaining weight through various initiatives. Having a car to use it for 1 hour a day and parking it for the other 23 hours? Or sharing and saving?

Pollution sensors scattered throughout the city, that allow diverting traffic to streets with lower pollution levels when there is an alert of excess of solid particles in the air of a certain area.

Variable road signs to redirect cars in case of excess of pollution. In addition, it can exercise a dynamic control over the traffic lanes, adapting them based on traffic circumstances.

Electric and connected public transport, both in taxis and buses, so they are faster than private transport, thanks to the full integration of sensors that communicate between vehicles, allowing a more efficient use of transport, and prioritizing trips in shared vehicles.

Sensors in parking spaces, through which the user´s demand can be managed.

Monitoring city traffic, you can direct emergency services to less congested streets, reducing the time of intervention of the police, fire brigade or ambulances, since it will be known which streets have with traffic incidents and which are more clear.

Open data so that all citizens can interpret the data and propose changes or improvements based on them. For this, a 100% open government is needed, who can explain how the use of data is tangibly improving their problems, how living in a smart city makes life easier and who builds trust among users.

Be a smart citizen by joining the :DriveSmart Community, the first community of positive drivers. Cities alone will not change, it is up to us citizens to change them. A Smart change is worth it!