Home / For you, driver / Truths and lies about smart cities

Truths and lies about smart cities 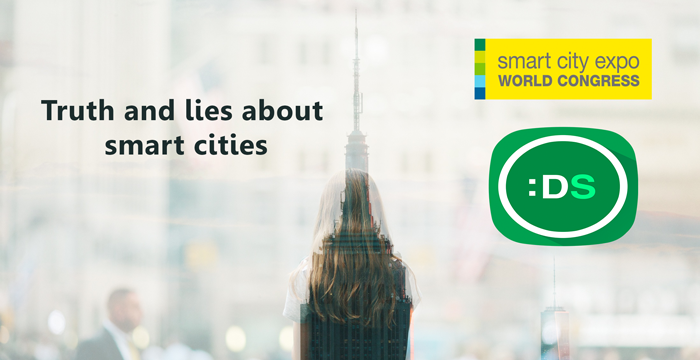 Yes. The smart city concept is still new. And yes, it is necessary to change the way we relate to our cities. Therefore, to delve into this subject, make the information accessible for everyone, and prioritize it on the agendas of the leaders, there are several conferences that put the spotlight on smart cities.

The most important one is the global Smart City Expo World Congress, held from the 19th to the 22nd of November in Barcelona. :DriveSmart will be one of the major players, giving lectures and with its own stand.

When we look closely at the concept of new cities of the future (and present), we find that there are several myths surrounding smart cities, 2.0 cities, and cities optimized with technology. And the question is… Are they true or false?

Are smart cities the solution to all evils?

Not even close. The ills of cities are many and varied. Smart cities are able to reduce some of them, by increasing the efficiency in the use of private vehicles or improving public transport services.

But, other factors are inherent to the concept of cities such as overpopulation or lack of civility, that require the participation of many other stakeholders such as governments, schools and, especially, each and every inhabitant of urban areas.

Are smart cities another way of doing business?

Yes and no. In 2050, about 70% of the world population will live in megacities, which makes it inevitable that we have to think about how we can transform them, looking for sustainability, efficiency and, above all, that they are livable for all people. The development of smart cities does not occur because of business interests, but of the need to regulate this growth.

However, it can´t be denied the economic interest of many companies who are jumping on the bandwagon of smart cities. These cities will have many changes at an economic level and major corporations will want to have their share.

In anyway, business is not viable without reaching a standardized smart city model, so it is important that companies are involved in the whole process of transformation.

Do they want to remove cars from smart cities?

Not even close. The car has been with us for over a century, it has accompanied man for much of modern history and must remain part of his life. What is sought with smart cities is to regulate private transport to make it more organized, so that cars do not take over the entire surface, but coexist with bicycles and pedestrians, saving money and reducing pollution in at least 20% over the next 10 years.

The use of technology is key: we need to know how vehicles move, what they need to reach their destination faster and reduce to zero the number of accidents, for which a mobile app such as :DriveSmart is of paramount importance, given its ability to analyze, generate data and help the driver achieve this objective.

The objective sought is precisely the opposite. If something smart cities need to succeed in, is that citizens are actively involved in all of these proposals. We are the ultimate stakeholders in that they work out and that the implementation is successful.

It requires a pedestrian friendly urban development, where the social and cultural components of cities go hand in hand with technology taking into consideration the large number of people who will move to urban areas in the coming decades.

The goal is clear: make cities more human for people through technology. Easy to say, but a big challenge to complete.

As we´ve seen, smart cities will not be the solution to the great ills. However, they will be of great help in improving the quality of life for all people, not just for those living in cities, but in the whole world. :DriveSmart is a deeply involved player in this change, and we need you, positive driver, to become part of the :DriveSmart Community and help us out.

Download the app to your Android or iPhone and be part of this great revolution. Are you ready?