Home / For you, driver / Telemetry in F1. Key to the engineer, a trap for the driver

Telemetry in F1. Key to the engineer, a trap for the driver 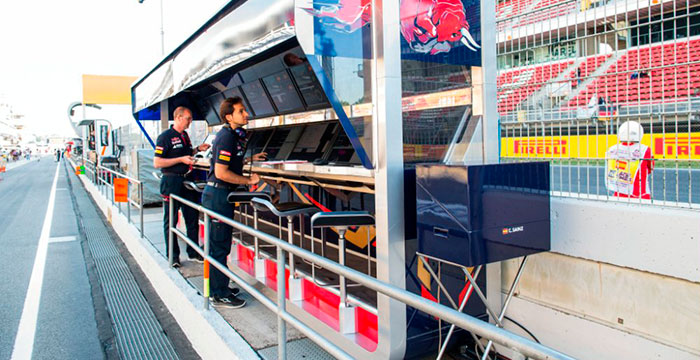 The Great Circus. The Greatest show in the motor world. A mare magnum of dizzying numbers. This is Formula 1, a key event in which competing and winning races is not a synonym of having the best driver. And also the opposite, the best on the grid might never set foot on the podium.

It is a fact. The human factor affects it, but it is not the main factor. Indeed, the car has the spotlight and the main weight of the race. Currently, it is the center of the competition and with the objective of improving it, all efforts and investments are geared towards it. Of it depends that a tenth of a second makes a team become the leader.

However, it has not always been so. In recent decades the approach to F1 has completely changed, the most revolutionary aspect has been the arrival of telemetry to the races. But why is telemetry so important in the competition? What novelties does it bring?

Telemetry brings out the best (and the worst) of the Car

In the 80s, telemetry was in its earliest stages. The electronics of the F1 vehicles was not even a shadow of what it is today. Engineers had to rely blindly on the sensations the driver experienced behind the wheel.

However, with telemetry what before was subjective is now objective. This technology transmits the measurements taken at every lap by more than 2,000 sensors located throughout the car. It can provide information on every detail related to the vehicle: from the wear of the brakes or tires, to oil pressure or the immediate fuel consumption, these are some of the examples amongst a long list of parameters.

Telemetry has become an irreplaceable support for the driver, since, for example, it shows if he is lifting the foot from the accelerator and not braking immediately (In F1 you never let the car “sail”, either you brake or accelerate); whether or not he is braking efficiently, and it also offers clues as to where and how he has to change certain behaviors in order to get the most out of the car.

With the development of this technology there are no more excuses. Each and every one of the movements are recorded by the telemetric system and the engineer is responsible of their interpretation, so there is no option to fool anyone. Hence, many have commented that it has put an end to drivers lying… 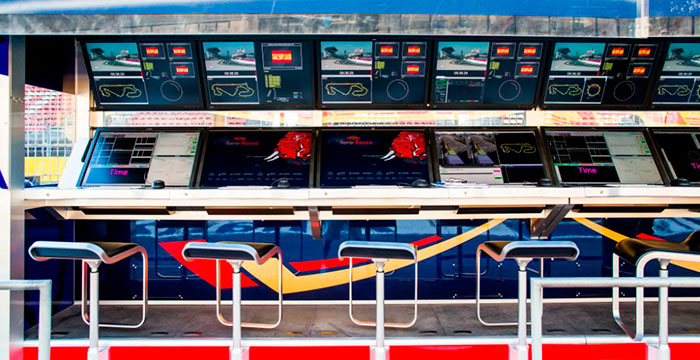 The data collected arrives, second by second, to the wall, where the engineer interprets them and modifies any necessary parameters in real time. It is his responsibility. Meanwhile, on the runway the driver is “only” responsible for managing dozens of buttons on the steering wheel, and taking into account all of the possible variables related to the vehicle and the race: tire wear, amount of gasoline used, using the break and the accelerator efficiently…

However, the benefits of telemetry don´t end there. This system also works as a F1 referee. For example, if two vehicles contact each other it can compare data on where the impact occurred, assess whether in previous laps the speed and braking parameters have been replicated at the same point or if the pilot has rushed too much and has made a miscalculation, which was the cause of the accident.

Most of the vehicles on our roads use many technologies from F1. Automatic transmission, hybrid vehicles, traction control and aerodynamic advances, first appeared in Formula 1 and then extended to regular cars.However, it is not the only technology that originated in the races and has ended up in the streets: smartphones have followed the same path.

In fact, the telemetry used in F1 is closer than ever. The data collection system that the :DriveSmart app uses is similar to the technology from Formula 1: it uses the accelerometers, compasses and gyroscopes from the smartphone, along with GPS information, to collect thousands of data that are then transmitted, analyzed and compared in a comprehensive cartographic database. Additional information such as the state of the road, the weather and traffic conditions, offer as a result a complete map of what you, the driver, transmit in the same way the racing driver would.

You don´t know how your driving is and how you behave behind the wheel? The answer is much closer and it´s much more accessible than the racing tracks… In your iPhone or your Android you can have your own Marco Matassa. How? Download the free app :DriveSmart… And feel like Carlos Sainz every time you drive your car!