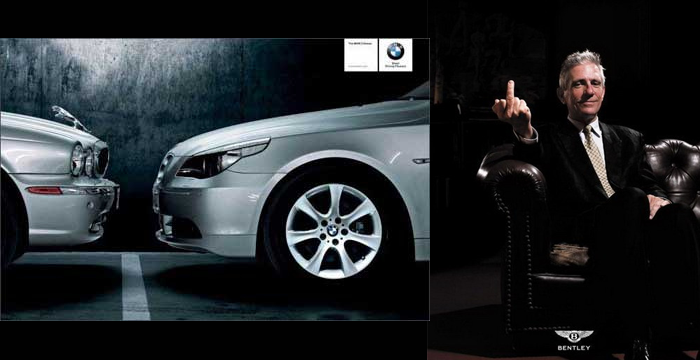 BMW in Munich, Mercedes in Stuttgart, Audi in Ingolstadt…the German industry has an overflow of premium brands that compete in the same segments all over the world. The war, past our frontiers, is served.

The war weapon of brands: advertising

The most favorable battlefield is no other than the American market. Over there, advertising laws are a lot more relaxed than in Europe and practically let brands “come to blows” in terms of aggressive marketing.

Taking advantage of the troubled waters, other brands like Jaguar and Subaru, have signed up to this war in which everything is possible just to steal a sale from the “enemy”. In any case, the Audi versus BMW rivalry is the one that has undergone the most battles.

Car of the year, a dangerous weapon

Since 1987 there have been several confrontations on ads and billboards lead by these brands, but the most talked about have been happening since 2006…

In that year, 2006, the BMW 3 Series won the prestigious World Car of the Year award.

To celebrate it BMW didn’t doubt congratulating Audi for winning the “South African Car of the Year 2006”.

The greeting included the following comment: “from the Winner of the World Car of the Year 2006”.

Audi didn’t wait to respond to the challenge “congratulating” BMW for their award.

Of course, they didn’t miss the chance to finish their message saying: “from the Winner of Six Consecutive Le Mans 24 Hours Races 2000-2006”.

Other brands have also entered the “peaceful” debate: Subaru (winner of the award of the best engine of that year) congratulated both of them for winning the “beauty contest”

The image of eloquence was done by Bentley (owned by the Volkswagen group, which also owns Audi) by showing a gentleman giving the finger.

No quotes, no congratulations, no “from…”. Nothing more. Connoisseurs… simply know best.

The battle of chess: checkmate

Audi started another famous battle in California with a billboard in Santa Monica.

In it they showed the new A4 and challenged their opponent with the phrase “Your move, BMW”.”

It didn’t take long for the Munich manufacturer to rent a nearby billboard that showed a photo of the M3 with the message “ “Checkmate””.

Audi Audi rented the billboard next to it and with a spectacular photo of the R8 answered: “your pawn is no match for our king”.

Without wasting time, BMW finished the chess game with a dirigible hooked to the Audi billboard. It included an image of their Formula 1 and the phrase “Game Over”. End of the battle.

Face to face between BMW and Jaguar

BMW published a face-to-face photo of their 5 Series and the Jaguar XJS, in it the front feline had turned around and was escaping from the Bavarian.

Mercedes Benz also had it with the feline brand with their famous ad of the tightrope walking hens. Have you seen it? Check it out!

The answer came quickly from Jaguar in a video that ended with their emblematic feline suspiciously surrounded by bird feathers… There are no words to describe it. You should simply watch it…

The German manufacturer didn’t surrender, it counter-attacked with an ad in which you could see a S-Class about to run over a jaguar with the message ”because cat-like reflexes aren’t fast enough…”

This is only a sample of the climate of creative confrontation that prevails in other markets. Rival brands use their creative ammunition for their own needs. Their objective is done: create striking ads that surprise, amuse and make the potential customer react…and take a position

There are more…. but we will leave it for the next post. Stay tuned! 😉