Home / For you, driver / Champagne and motor. The unusual origin of a tradition

Champagne and motor. The unusual origin of a tradition 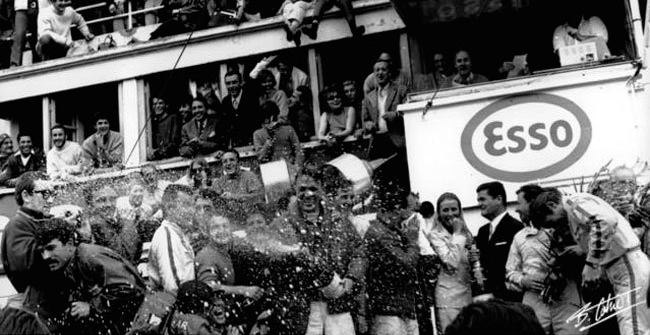 We´ve seen Champagne in many sporting events, but especially in those related to the automotive world, and of course, we can’t forget the pinnacle of motorsports Formula 1.

At :DriveSmart we wondered where and how this odd custom started, since it has become a symbol of this type of events. We found the answer in the land of champagne, but what about the how and the why?

The 24 hours of Le Mans are to blame

The first time that a winner was given a bottle of champagne was in 1950, when the Grand Prix started in France. Which was without doubt, the perfect place and time to celebrate, and there was no better way to do it than with a bottle of wine from the region. In this case, they chose to drink it and not splash it.

In 1966, during the 24 Hours of Le Mans, physics (and also chance) added to the sport a distinctive moment that would be continuous year after year.Jo Siffert, the winner that year was given a bottle of champagne that had been under the sun for a long period of time. When he oppened it the accumalated pressure and caused him to soak eveyrone that was around him in champagne.

It was a complete accident, yes, but that revolutionary moment caught everyone´s attention. The following year, Dan Gurney, who also won the 24 Hours of Le Mans, decided to replicate the effect of his predecessor by shaking the bottle vigorously. He obtained an identical result, and thus, the tradition was born. 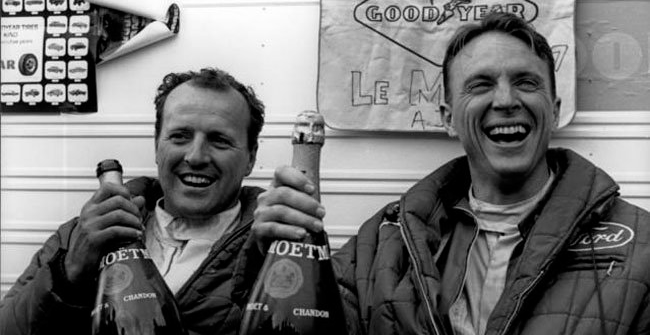 In F1 and up to the year 2000, the bottle that was the star of that moment was a Moet & Chandon Magnum (1.5 liters of delicious champagne). Thereafter, influenced by marketing the bottle was changed to one with a higher capacity: a Jéroboam from GH Mumm Cordon Rogue (3 liters, no less).

Underage? Not a drop

At what age one is one considered a “minor”? In most countries it is assumed that it is someone who is younger than 18. However, in countries like Turkey, you can´t drink alcohol until you are 25. That is the reason why, in 2011, Vettel, a famous Formula 1 driver, was younger than 25 at the time he won in Istanbul Park, could not drink from the bottle. That’s right: the only let him shake it and celebrate by bathing the public. What else could he do!

Arab countries have major restrictions on alcohol consumption, so on this topic the F1 faces different problems. On one hand, advertising from some of the sponsors of the teams has to disappear in great places such as Bahrain or Abu Dhabi. On the other, they can´t celebrate victories with the typical French drink, but they do it so with a mix of juice with bubbles. At least, it the tradition continues.

What is the key for enjoying a great moment just like an F1 driver? After winning a tiring race, take your wallet out on a walk and get a good 3 liter bottle of French champagne. That is one option. The smart alternative is getting a bottle of a bubbly drink that is not champagne, that even children can drink: much cheaper and with the same bubbles. Of course, don´t let your iPhone or Android with our App get wet … we are not responsible for you getting wild!